El-Nino has been assigned responsibility behind haphazard (or, for some, desirable) weather patterns across the world. The eastern-half of the United States has been experiencing warmer temperatures than usual. Los Angeles has hosted a cold winter and is exhibiting a reverse spring, in which the spring begins with relatively hot temperatures before tapering into colder temperatures as time approaches June. The media is investing attention into critical droughts across the African continent, where El-Nino weather patterns have exacerbated agricultural encumbrances. 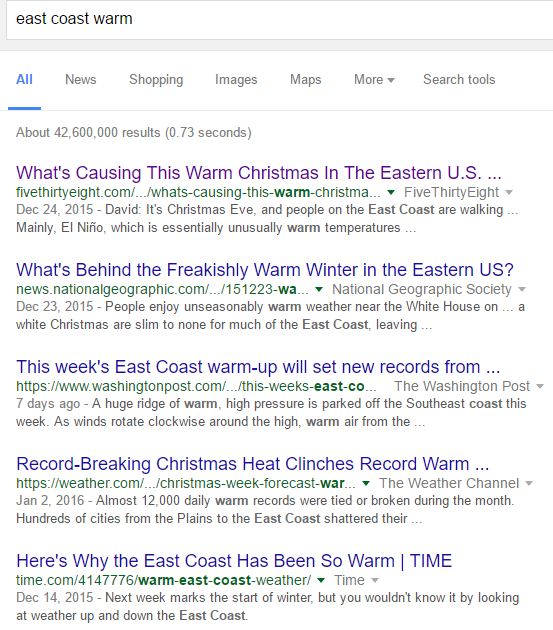 El-Nino is an oscillation phenomenon (for those familiar with meteorology, think hadley cells and the like) associated with warmer ocean waters. The changes in temperature from colder waters to warmer waters eventually leads to high pressures on the western Pacific (i.e., weather characterized by less precipitation for east Asia) and low pressures on the eastern Pacific (hence the plethora, and needed, amount of rain visiting California). El-Nino brings a variety of weather conditions to the Arabian peninsula (Abu-Dhabi and Dubai recently encountered a strong storm system) and to Sub-Saharan Africa (both heavy rainfall and droughts). Overall, El-Nino’s associated warm Pacific waters impact the world’s entire weather.

Climate change has, and continues to, strengthen certain El-Nino extremes. The tug-of-war between climate change warmth and El-Nino warmth can keep storm systems around a given continent for far too long. Hurricane wind speeds/intensities increase with pervasive high temperatures. Melted glaciers in North America make their ways to the ocean and induce erratic air pressure patterns that are not conducive for agricultural and urban means. Climate change enthusiasts would be remiss for not including El-Nino in their meteorological debates and teachings.

So the next time you talk about the out of the ordinary weather, know that the warming of the Pacific ocean (i.e., for this year, El-Nino) creates the pressure cells that yield the odd temperatures, storm systems, and droughts. Although El-Nino is a natural occurrence, anthropogenic factors, including climate change, can shape El-Nino for the better or for the worst, depending on who you speak to.