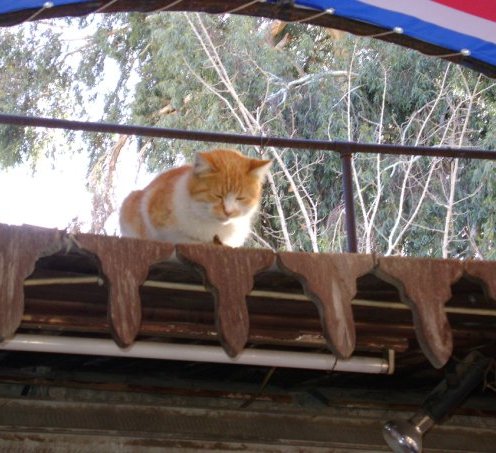 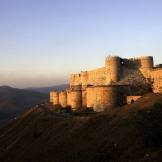 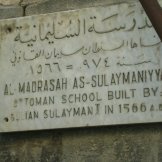 Al-Madrasah As-Sulaymaniyya, a school complex built by the Ottoman Sultan Sulayman (or Suleiman the Magnificent) in Damascus, Syria.

The southern corniche in Latakia, Syria.

New year celebrations by Bab-Tuma (The gate of Thomas), Damascus. 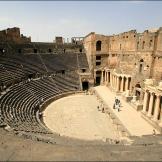 An amphitheater near Daraa, Syria.

Despite Syria’s unconventional genesis as a European-made mandate state in accordance with the Sykes-Picot agreement, the Syrian people and their cities have reflected national attitudes and customs that imply a natural foundation of nationhood and cultural bonding.  Damascus, Aleppo (Halab), Homs, and Hama can be characterized as sibling cities with peoples that have interacted with one another for centuries and common traits that define them as markers of human achievements.  The word “Syria” has been written in many languages and owes its existence to older words affiliated with the modern state’s lands.  So far, Syria has witnessed the beginnings and maintenance of human greatness; however, unfortunately, recent events in today’s Syria (as of September 10, 2014) have yielded objectionable times, human radicalism, corruption, and international agitation.

Historically speaking, the Syrian people did not instinctively advocate for the modern Syrian borders that we know of today.  Under the tens of empires that Syria’s lands were controlled by, the cities of Beirut, Tripoli, Aleppo, Damascus, and portions of the Al Anbar Governorate in modern Iraq were often grouped under one province/governorate/administrative region (such regions slightly varied between empire authorities).  Following the defeat of the Ottoman Empire in World War I, the state of Syria was formed by means of European power influences and ignorance regarding the composition of occupations, customs, and languages across Mesopotamian and Levantine areas.  The Sykes-Picot agreement ultimately prevented the course of time from allowing the region’s people to decipher their own aspirations under nationalist scopes.  By simply looking at the unification of Germany and Italy, the unification of autonomous kingdoms in the Iberian Peninsula, and the breakup of Yugoslavia with a relative comparison lens, one can see how today’s modern state of Syria was not formed entirely by its own people or from people in adjacent regions.

Although Syria’s establishment may seem artificial, Syria still exhibits itself with its own organic outlooks and experiences.  Most of Greater Syria’s historically active trade routes are under the jurisdictions of the modern state of Syria.  Centuries-old communication structures have existed between groups of people within modern Syria’s borders.  The traditions residing within most of interior Syria (which does not include lands adjacent to modern Lebanon, today’s Latakia Governorate and the historical Jabal Druze administrative region) have more similarities than differences, much like how the many Germanic kingdoms that submitted under the Germany umbrella possess near-identical holidays, values, and dialects.  Ultimately, the present nuances in modern Syria are nearly negligible in terms of nationhood principles.  Furthermore, literature, movies, and even video games (i.e. Assassin’s Creed video game series) have strengthened the present state of Syria’s identity through their use of the word “Syria” instead of the more historically accurate “Greater Syria” and the settings that characters experience in Syria’s lands.

Backdrop of Hama, Syria, with the Norias of Hama at the forefront.

The first city that should come to one’s mind when one thinks of Damascus, arguably the oldest continuously inhabited city in the world, is Aleppo.  Aleppo and Damascus have been sister cities since the spawn of their respective trading activities.  The tens of empires have always paired the two cities as important hubs of trade, education, and agriculture.  Aleppo was a gateway to Damascus, and Damascus was a gateway to Aleppo.  Without one of either city, the remaining city would lose its ardor, its growing cultural trends, and its cosmopolitan movements.  Alongside these two grand places, Homs and Hama come to mind.  Homs and Hama are neighboring cities in between Damascus and Aleppo, and each city has fostered human innovations.  A person from Homs (a “Homsi”) is a target of silly stereotypical “Homsi Jokes” in order to poke fun on the grand reputation that Homsi’s have – Homsi’s are known to be vibrant, intelligent, and lively people.  Hama possesses the Norias of Hama, a large water wheel filled with pots that facilitate the movement of water throughout the city for agricultural purposes.  It is speculated, but not confirmed, that Hama witnessed the invention over 100 types of yogurt mixtures throughout its long life.  To tie the knot of Syria’s “sibling cities”, Daraa, the southernmost city in Syria near the border of Jordan, is a very old city, like Damascus, and has served as an important point of transfer and hospitality for merchants from all over the world for centuries.  Furthermore,  Deraa, like Damascus and Aleppo, houses important Roman facilities, monuments, and was once noted as a “prominent city of Arabia” by the historian Eusebius (Eusebius and other Romans called the city Adhri’at).

Today’s Syria is a part of the historical Fertile Crescent, a crescent-shaped territory that starts from the port of Basra, traverses through the Tigris and Euphrates rivers, and, depending on which side of academia you look at, includes the Nile River of Egypt.  The Fertile Crescent changed the world’s environments and laid many fates for today’s Syria.  The Fertile Crescent has been pursued and conquered by tens of empires, given its geo-political importance and the amount of resources in its lands.  Ultimately, Arab foundations laid a large basis for modern Syria’s culture, though Syrian culture also includes the many Eastern and Western empires that have conquered the Fertile Crescent.  The ramifications of European, Arab, African, Persian, Indian, and Far East Asian influences rendered the peoples of Greater Syria to be highly regarded intellectuals, engineers, and doctors.  Moreover, Greater Syria’s schools were characterized as some of the greatest in the world, and the institutions attracted people from all four corners of the world.  As a result of long term investments in education and trade, standards of living in Syria were heralded as healthy, fruitful, and enjoyable.  Food was abundant, many laws were fair, and opportunities were expanding.  Unfortunately, alongside these grand achievements within the Fertile Crescent comes the well known harmful agents of totalitarian dictatorship (including the Assad Regime), extremism (the self-proclaimed group of ISIS/ISIL/IS, a group of people that I consider not to be Muslims), and the perpetuation of ignorance, lies, pessimism, and the national brain drain, leading to false stereotypes that are sometimes wrongly championed by Syrians themselves (this sentence was written to define my opinions on Syria as of September 19, 2014).  It can be concluded that a reversal of greatness has occurred.  I hope for Syria to overcome its obstacles and to walk forwards towards a 21st century state of mind.

Syria is a country inhabited by great people with original and authentic ways of living.  These people have challenged the results of the Sykes-Picot Agreement and have not succumbed to its artificial set-up.  Syria’s cities were meant to exist with each other, and continue to amaze the global community with their history and their presence.  Syria has always fascinated people around the world, and has thus yielded both good and bad events.  One of my biggest aspirations for the next decade is to see Syria enter the 21st century.

Rather than a majoritarian electoral system, which is currently under practice with Assad’s regime, Syria should implement a proportional electoral system, in which a majority is not necessary for a given candidate to be elected into a legislative body.

Proportional systems empower multiple minority groups moreso than majoritarian systems, since minorities have better chances of achieving enough votes within a proportional system to enter a government body versus achieve an actual majority to enter politics. In addition, proportional systems become more representative of their societies in the event that additional electoral districts are created. With Syria at a nearly Balkanized character, the case is rested for the need for more electoral districts for the sake of increasing the voices of Syrian citizens who are often separated from their political processes. Finally, with a wider set of minorities in power, the military of Syria would have to listen to a government of diverse voices, which would disable prominent military figures for aligning heavily with certain groups of government officials on the basis of religion and/or ethnicity.

The last time Syria had a Constitution approved by popular vote was in 1950, a time when analysts expected Syria to be a beacon of human well-being among the young nations of the Middle East. Since every single constitutional change following the Constitution of 1950 was not made via popular vote/demand, I believe the best foundation to return to in a state of transition is the enforcement and rule of law behind the 1950 Constitution.

Onward to a 21st century Syria.