The September 9 door/gate in İzmir, Turkey. 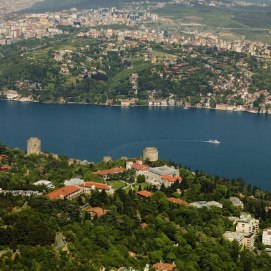 The lands of Anatolia, now home to the modern state of Turkey, have attracted the world’s spotlight ever since their genesis.  Turkey’s role as a continental bridge and melting pot has brought about many emotions, fascinations, and opinions from many peoples around the world.  Today, Turkey houses past and present effigies of Turkish society, a society influenced by customs that date back through centuries and epic migrations.  Historically speaking, the Turks have ruled a variety of peoples, including Arabs and Circassians, as subjects of their empires (e.g. Seljuk and Ottoman empires).  However, when one expands their scope on Turkish, Arab, and Circassian relations, all three groups are indebted to each other in terms of culture, economics, innovation, and human life (i.e. housing survivors of the Circassian genocide, maintaining the longevity of Arab prestige, and facilitating the trade of spices, weapons, and textiles).  The first president of Turkey, Atatürk (deemed by many as one of the greatest leaders of the 20th century, yet criticized by significant individuals as well), prevented Turkish lands from falling into European spheres of influence (analogous to the Sykes-Picot agreement in the Arab World), essentially invented and founded the modern state of Turkey, and is responsible for its present status as a nation that fits 21st century principles.